Whew! Going to be a great year!

Yup, as usual life has been busy.
I swore this year was going to be a great year and so far it is going pretty good. A lot of work, but going to be worth it.
I have made arrangements with the owner of the feed store to sell items for her on ebay. And, she is now going to advertise on her website that there is an ebay option for people who want to sell their items. I get a nice percentage and she gets a percentage. A win, win for everyone. And yes, it is keeping me very busy. Between taking care of everything that needs to be done here , fighting for animal's rights and now more sales on ebay, I am busy. 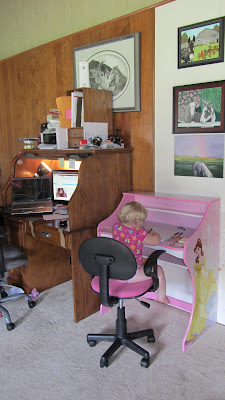 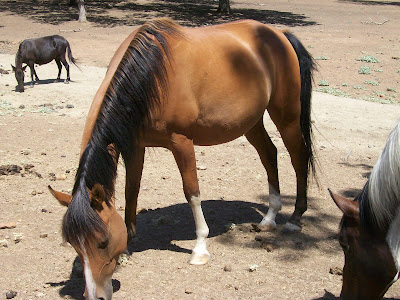 Every now and then I check out Craigslist. Well, a few weeks ago as I was perusing the farm and garden looking for hay when  I ran across an ad for an eight year old Arabian cross gelding. Out of curiousity I clicked on it to see that one of the horses I rehomed a few years back was the horse listed! The asking price wasn't very much and I seriously thought about gathering the money together to buy him back, but after much processing I decided it wasn't financially acceptable. The cost of hay has risen sharply and as it is, feeding the herd that is here now is hard enough, adding another large mouth to feed just wasn't doable. All I can do is send it out to the universe that Jeff finds a great home.

Now with tourist season right around the corner I have decided to install several security cameras as well as an electric fence. With the opening up of horse slaughter plants, I am taking no chances of anyone stealing any of my horses, donkeys or goats. And I am pretty sure everyone around here knows or has heard through the grapevine that I do pay attention to who goes by, and that I do/will confront anyone who stops in front of the pasture.

Well, I had best get to doing chores and making money.

Hugs to you all!

Knock. Knock. Anyone still there? I am back!

Well, it has been quite a long time hasn't it since I last wrote anything. When I looked at the last date even I was shocked it has been this long. Everyday I tell myself to at least write a quick hello to everyone.  But alas, I don't. So, this time I am. Just a quick one right now.

Grace just turned two. Yes, two! She had her two year old check up and she is perfect! Yay! Her mom is still unemployed. Still no child support.

I woke up January 1st and decided right then and there that this year I am taking it by the horns and climbing the ladder. A very dear, dear friend of mine somehow sent me such energy through an email that it was downright amazing!

All the animals are doing good. We lost several cats over these past few months, but other than that, all critters are happy and healthy. A friend of mine needed a home for two of her goats, so yup, the goats are here.

I am also quitting smoking! A 30+ year habit is hard to quit, but it is going to happen. And you can bet I have my days where I just want to kick someone's ass!

Selling on Ebay is going pretty good thanks with the help of the gal who owns the local feed store. She gives me items to list, I sell and make a precentage. It's win win for the both of us.

Yes, I am still a warrior for the animals.

Thanks to Facebook I have been able to keep up to date with Jim, Ron, Sophie, Tina, Lilla and others. And I think of John, Stew, and many others everyday.

As much as I have been meaning to get back to blogging on a regular basis it just hasn't been in the cards. Lately there has been so much going on. Gracie's mom was fired over an emergency here at home. Her bosses are lying and fighting her unemployment. Hopefully after the unemployment hearing she will get her unemployment. This whole thing has been emotionally draining as well as financially.
AJ, my Mustang has some serious hoof problems that I am trying to get under control.
I took in two more goats for a Face book friend who is going through some of life's challenges herself.
The work car needs, well some work thanks to a gas leak. Which only leaves the trucks for transportation and with the gas prices climbing again that is putting a pinch on things. Living in the country does have its disadvantages at times.
I am back to selling on EBay which thanks to the economy isn't going as well as before.
Gracie is already going through the terrible twos. And Gracie's mom is still fighting for the sperm donor for child support ( which he still hasn't paid anything on).
Plus I am active in saving the Mustangs, trying to end dog breed discrimination, trying to stop slaughterhouses from opening to slaughter horses,  helping the elephants who are living horrendous lives, etc....
In a nutshell, life is not leaving much breathing room. Yes, I am aware if I step away from helping the animals that need a voice would give me more time, but it isn't in me to do that.
I believe we are never given more than we can carry at a time, but I have to admit, my plate has been full enough these past few years to last a frickin lifetime.
Okay, enough of the whining.
So, my goal is to start blogging on a regular basis come winter.
I truly hope when I come back I will still have some followers!
Jim and Ron, please give Miss Sophie a big hug for me.
Stew, I will catch up with your wonderful posts about your profession.
John, I really miss keeping up with your adventures.
Tina, please give all the donkeys a hug from me.
Lilla, keep up all the good work.
Deb, I'm sure your Grand baby has already been born. Hugs.
Kelly, continue to get the word out about elephants! You are amazing.
Inger, hope life has dealt you better cards now.
Everyone else who I didn't mention, hugs to you all. Hope to see you when I come back.

A project, BSL and Grace

Oh my, I actually have a few minutes to post!

I have been wanting to get to a project for awhile and yesterday I actually found some time to do it. Periodically I see an old rotted out wood stump and when I do I bring it down from the hills behind the house. My idea was to finish hollowing them out, secure the bottom and plant flowers in them. And I did it!!! 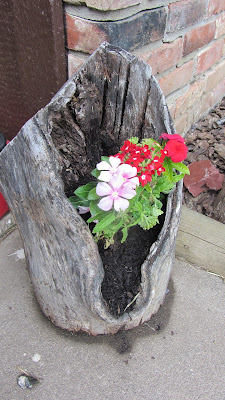 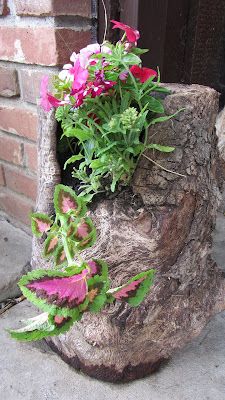 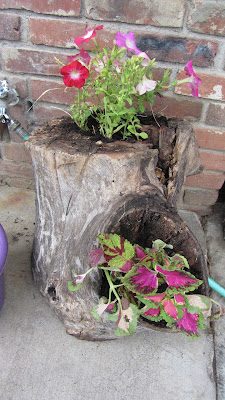 I have also still been busy trying to stop the BLM roundups of our Mustangs. And now I am involved in getting BSL stopped.  BSL stands for Breed Specific Legislation. Pit Bulls are the main target of this ban. Dogs are being taken from their homes and killed because they are the wrong breed! I don't know if any of you heard, read or followed what was going on in Belfast North Ireland concerning a dog ( who by the way was not a bully breed) named Lennox. Rather than go into detail, do a search on Lennox and read for yourself.  The BSL ban infuriates me as well as thousands and thousands of other people. No one has the right to target any breed and try to eradicate them. Sometimes I wonder if there is hope for the human race when it comes to certain people who think and believe they are Gods!

Grace's sperm donor ( biological father) is starting to cause trouble now.  I mentioned this to Grace's mother not long after she was born that I had a feeling the sperm donor would cause problems somewhere down the line. He won't pay child support but wants to see Grace. However, he is doing drugs and is an alcoholic. I have a feeling this all may be going to court.

Well, my few minutes is up. Grace just woke up!

Hugs to you all!

A Quick Trip to San Francisco!!!!

Want to see one ugly rooster?

I have been meaning to post a few pics of Troy. He is a black Frizzle Bantam and he sure turned out to be one ugly rooster. So ugly he is staying!

Thought you might like to see just some of the roses here. As far as I can determine these rose bushes have been here since the 1960's. Will show the other roses on the property in a day or two. The roses up at the barn I believe are older.
Oh, and speaking of barn, the upstairs of the barn used to be for hay, but in the 1970's a studio apartment was built for the caretaker who has since passed away. 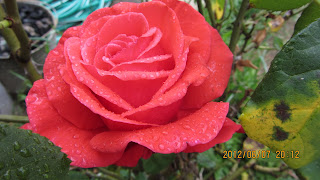 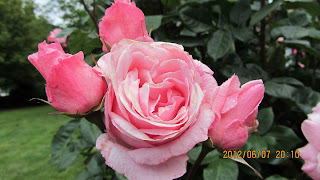 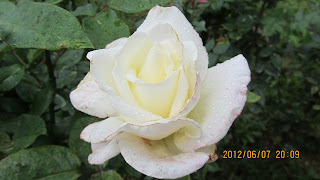 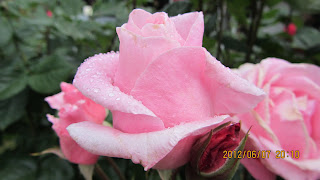 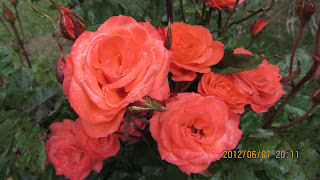 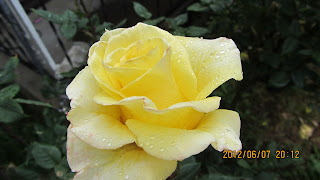 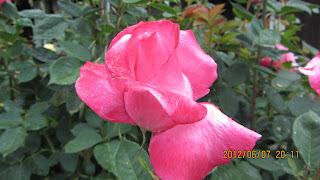 AJ-OAKS
My passion is helping animals. Will fight tooth and nail for what I believe in. Independant. Believe in The Golden Rule and what goes around comes around. Treasure my family, friends and all the animals that I have had the good fortune to have had and now have in my life. 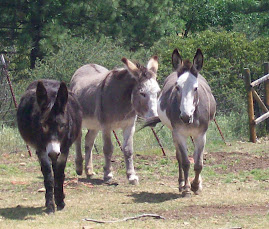 Favorite picture of my horse 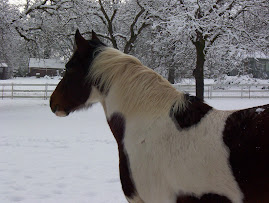 My horse during my favorite season of the year.